Mike Hillis, a local of the Triangle, renovated his bathroom using Habitat Wake ReStore tile, among other things. Check out the photos below of his beautiful new space and let it inspire you to use the ReStore as a resource for your own DIY and renovation projects!   Before: 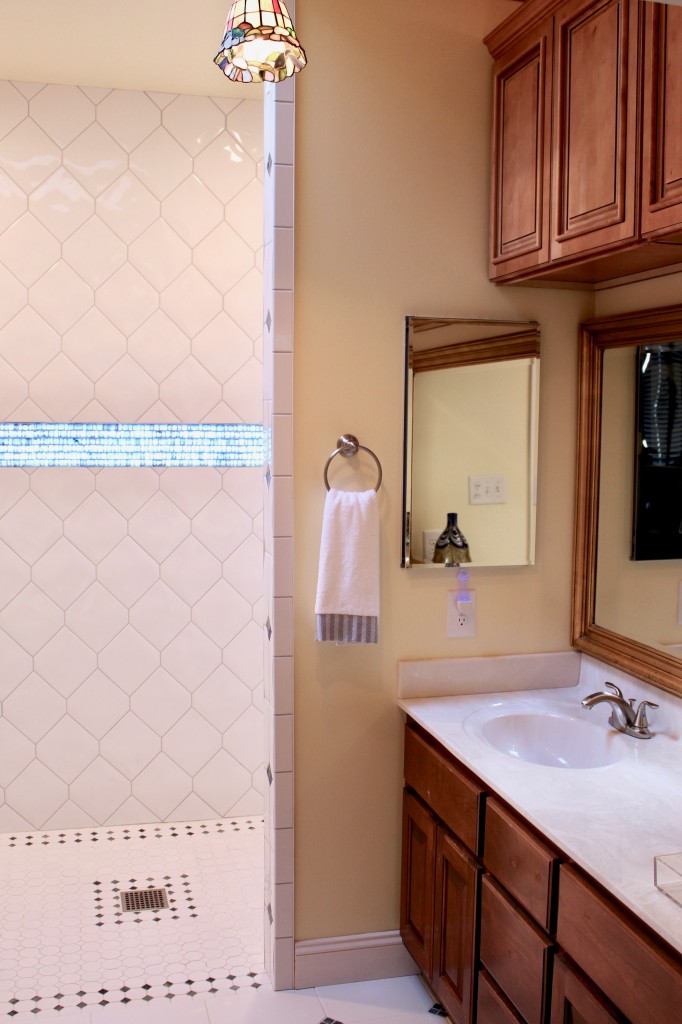 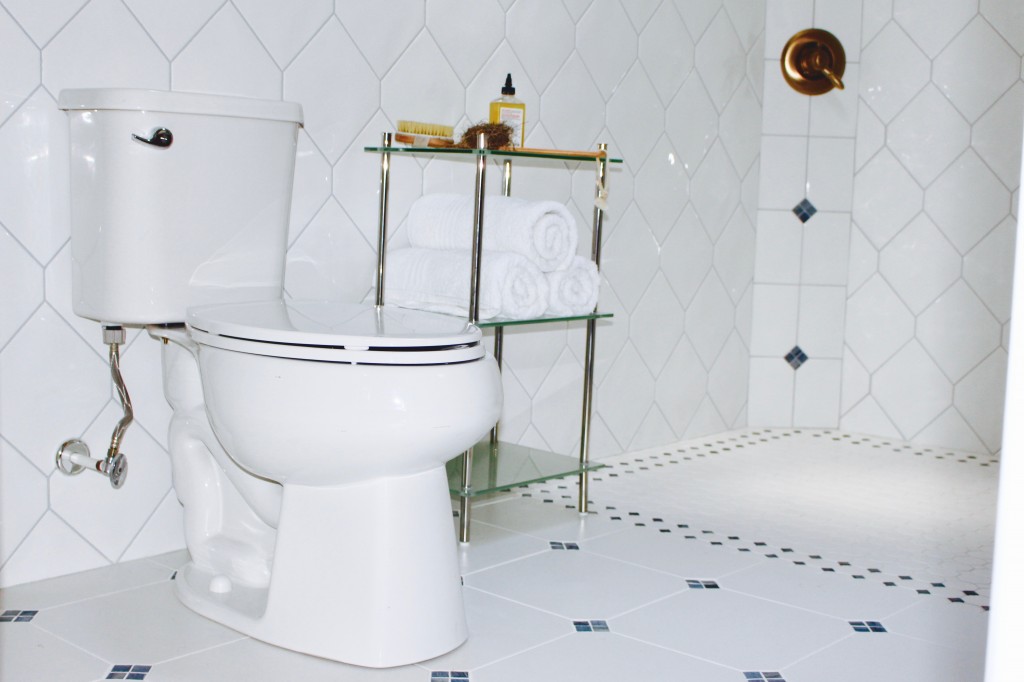 What was your initial motivation for the project? What was your vision for the completed version? I bought the house in late 2008, and knew the master bath would need to be renovated. The garden tub was too big for the room: it made a closet impossible, forced the separate shower to be very small, and more importantly took an entire tank of hot water to partially fill the tub. In late 2012, as I stepped out of the shower, I noticed the floor was more like a trampoline than a solid surface, which lead to the discovery of a slow leak. Most of the floor and some of the joists were rotten in the master bath. While I was waiting to settle with the insurance company (it took almost three years), I began to brainstorm ideas for redesigning the space. My ‘wish list’ included: more storage, a large walk-in shower, a walk-in bathtub (which I later eliminated), and a space that could accommodate a wheelchair. I also wanted a contemporary bathroom with good lighting (there are no windows). To make it feel classic, I wanted natural, neutral-colored tile that would give a feeling of elegance and timelessness. I figured that I could change the paint color or add wallpaper occasionally to give the bath an update when needed. I got advice on the new floor plan from several professionals, and ultimately ended up combining all of their advice into a custom floor plan. I am especially thankful to Jensine at Best Tile for her frank but professional guidance on how to select the tile.   What was the process like? The process took a little more than three years to start, but only three weeks to finish. There was damage from the leak and the insurance company appeal took a while to wrap up. Once I realized it was going to be a while before the renovation would start, I began to visit Habitat for Humanity of Wake County ReStores almost weekly. I have a garage, so was able to store items as a I bought them at the ReStores. As I found different materials at the ReStores, I adjusted the design. For example, I had originally planned for the vanity to be 64 inches wide, but the cabinet and top I got from Habitat was only 60 inches, so I moved the wall on the floor plan. The plan called for two sinks, but I only installed one (plumbing is roughed in for a second sink) because the top I got from Habitat Wake ReStores (new, still in the box for $35.00) only had one sink. One day I was in the ReStore and they were putting out boxes and boxes of wall tile. When I looked at it, I recognized the manufacturer as a high end firm from Italy. The boxes were all strong and unopened and I did not find any broken pieces in the single box I went through. But it was all white. Other than the color, it met all my desired criteria, so I bought it for $27 a box.  I failed to notice the coverage rating on the boxes of tile from Italy was in square meters, not square feet! I ended up with nine times more tile than I needed! So the design was changed again to cover all the walls except for the area around the sink. 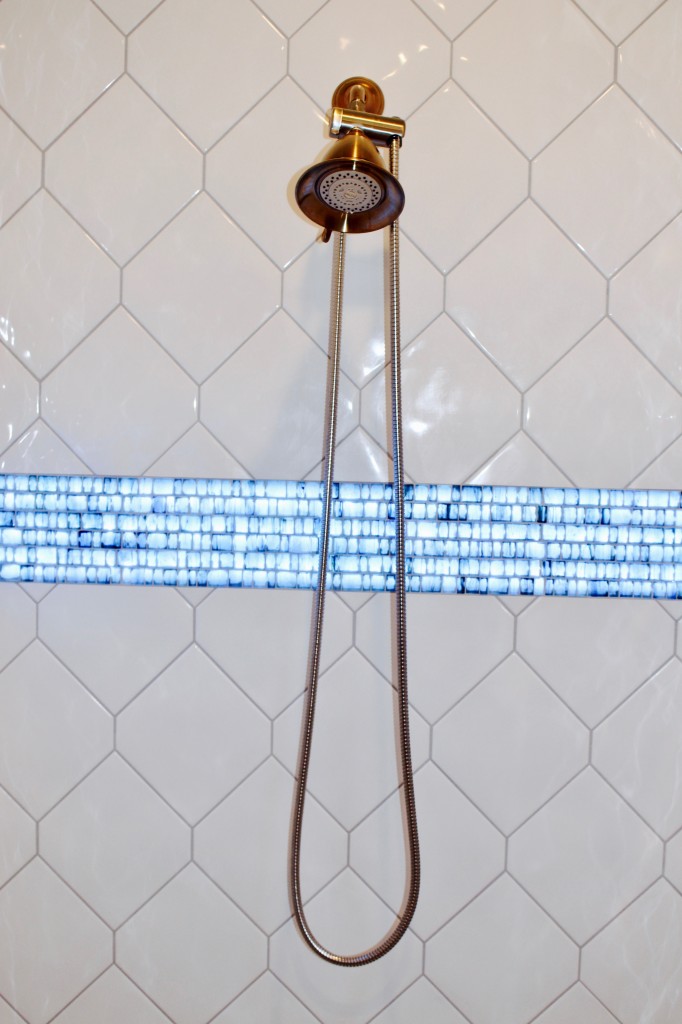 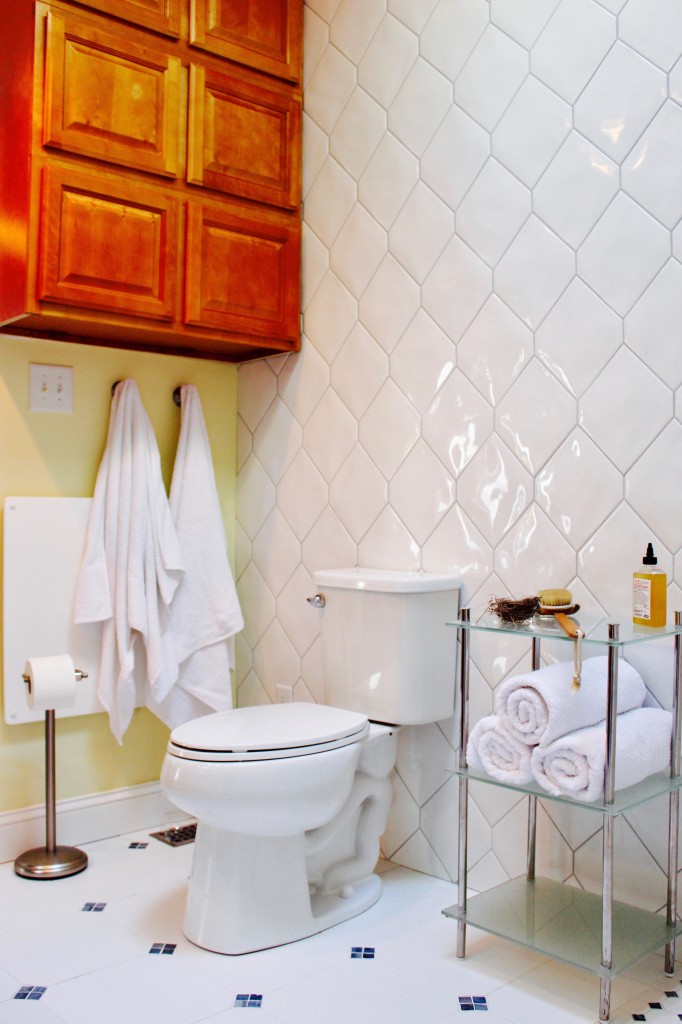 What was the timeline for the project? The project took a little under three weeks to get to this point and I still have a few things left like the doors, lights in the vanity area, grab bars, a heated towel warmer, and some wood trim work to install. I ran out of money so I am waiting a few more months to finish up.   Who all did you work with besides the ReStores? As I mentioned, Best Tile on Raleigh Blvd. was a great help, and in particular, Jensine was always professional, tactfully frank and very wise. Lauren Phillips at Splash Galleries and the VIM product people were spectacular, providing helpful information on barrier-free design and product information. I continue to rely on Sue Warren at R. Jacobs Fine Plumbing and Hardware. Tina Federighi at Lowes on Capital helped with the design and gave a bid. Once I had the design, Conrad Nurge with ReBath recommended a few tweaks. Once the project was underway, Evan, the primary ReBath installer, recommended several changes which improved the finished bathroom a lot! Evan had a ton of experience and was able to give me a vision of the problem as he saw it and his proposed solution. Finally, the lighting system in the glass tile on the wall was designed and engineered by BacklitTileKit. They have a well thought-out product that anyone can install, including me! It adds a spectacular feel to the room and was well worth the splurge.   What ReStore materials went into the project? Almost all of the white tiles came from ReStore. The cabinets all came from restore, as did the side panel for the cabinets. The vanity counter top and faucet came from the ReStore. Everything else was new or from the previous bath. I figured I saved $8,000.00 by buying at ReStore. 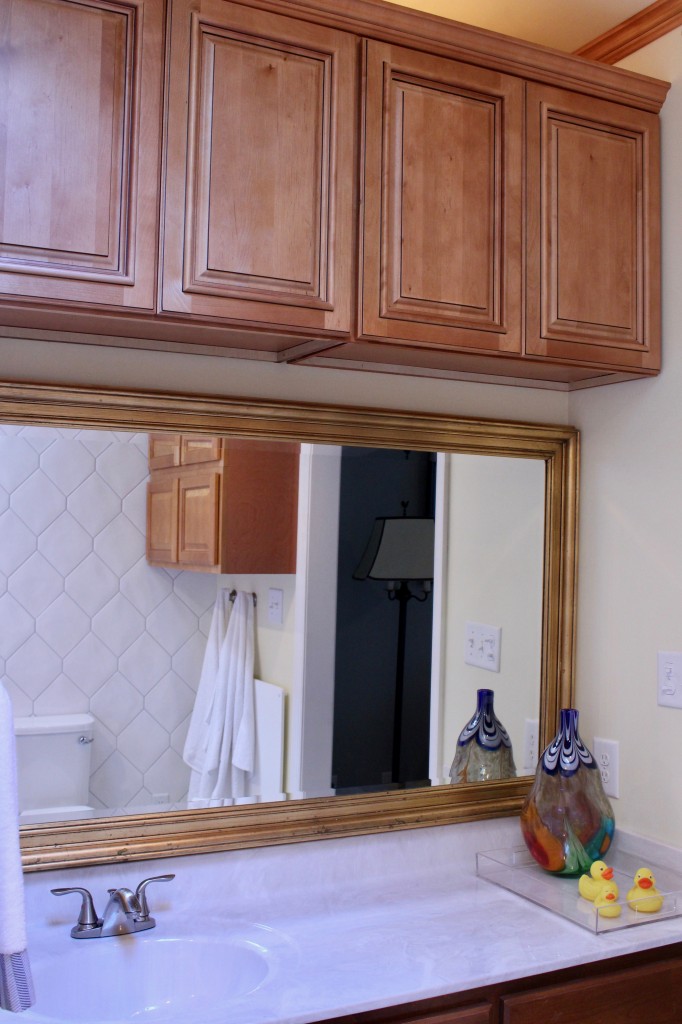 Which Habitat Wake ReStore did you use most often for your supplies? I took 3 years to get it all together and all the ReStore materials from the Raleigh Blvd. location.   What's your favorite part of the bathroom? I like the walls and floors the best. As the light comes in from the skylight, the wall tiles shine in patterns that always change, which makes it look new and different every day. I also like the back lighting of the glass tile. It is easily the thing that people are amazed to see. I also like the fact that I had a small, separate electric hot water heater put in for the master bath. Now I don’t run out of hot water when others in the house are showering or washing dishes or clothes!   If you could go back and do it again, would you do anything differently? I would have installed the shower heads to angle differently, and I would have installed smaller shower heads on the side in addition to the primary heads. I would also like to have heated tile in the shower walls. The tile can radiate cold in the winter! Finally, I would install a full wall of cabinets next to the toilet instead of the half wall which is there now. I will change this when I finish the bath later this year.   What's your advice for someone looking to renovate? Jensine gave me great advice. First, she said the thing she sees over and over is that people get in a hurry. Don’t get too caught up in the excitement of the project because you can start to feel like a kid at Christmas. Be thoughtful and patient. Ask a lot of questions and get lots of professional opinions. Second, she said plan for the future. Specifically, she suggested putting blocking everywhere you think you will need it and places you probably won’t. For example, it's a good idea to have wood behind the tile to secure grab bars and other devices like a soap dish you may want to move or add to what you have. Take pictures of where it is before the tile board goes up so you can remember once the tile is in. Other advice: